Five “Movie Stars” and one “Aviator” P-18  model airplanes were on display at our March 2, 2019 “Stars & Aviators” Mass Launch. Eight planes vied for the grand prize.

How to Set Up your own “Stars & Aviators Take Flight” Mass Launch Program
Tips, Templates, and Advice for Model Builders and Administrators

To make it manageable, information for the Mass Launch Program
has been divided into three web pages with links to the other pages above.

The rules for our Mass Launch have evolved over time as a result of positive feedback from a number of area modelers. It is from this reaction to the program that we have adopted this approach and hope it will serve to increase the popularity of the program as well as foster a competitive flavor between Model Airplane Clubs. 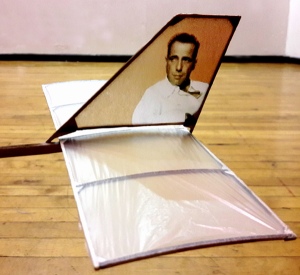 Rudder photo of Star or Aviator

1. The “Stars and Aviators” program will be at its core a “No Holds Barred” approach except for these two restrictions.

A. The minimum weight for the plane shall be 7.5 grams.

B. There must be an identifying photo using printed tissue of the Vintage Movie Star or Aviator on the Rudder (shown at right).

2. The program’s use of the Program’s Wing Tip Logo (shown at left) has been decided to be optional and is up to the model builder to include or not to include.

3.  It has also been decided to have the Star or Aviator’s name optional as well (shown at right) and again is at the discretion of the model builder.

However if you would like to include the wing tip printed tissue on your plane, a special web page was created to help you accomplish this.

It can be found at How to Set Up Your Own “Stars & Aviators Take Flight” Mass Launch Program webpage on this website. Outlined on this page has very good way to get usable photos of the celebrities for use on the rudder. Also included are directions on how to print the tissue needed for the rudder photo, the right side wing tip logo and the left side star or aviator’s name. Helpful construction building tips can also be found on this page for many types of indoor models, not just for the Vanguard P-18.

This in essence means that although the program’s roots began with using the Vanguard P-18 kit from Laser Cut Models which is easy to put together and a great flyer, the rules do not restrict the builder from using his or her own materials, methods and design. It also allows the builder to use a plastic or wooden propeller with no restrictions in construction or size. The standard rules for the P-18 size designations however apply, meaning the wing span cannot be over 18 inches. More specific refinements to the rules may follow, but basically there you have it.

Mass Launch Events: Members may bring and swap out a wooden (or other material) propeller of their choosing for use on their entry for the Mass Launch. However, it is the responsibility of the member to keep track of the plane’s original prop and return it to the plane when the event is over. Although not prohibited, members are encouraged to fly one of the Club’s planes, and not one of their own making. If you are good at trimming, the next time (Marilyn or other celeb) will fly better, and will be a positive thing for the program.

“HAFFA Official Timed Events”:  For the official HAFFA Competition Events, members may use any plane they have built and donated to the program, even years form now to earn points that go to a total score for the season. Note however that HAFFAs rules call for the use of a plastic prop as always so if you bring a wooden prop for the Mass Launch, swap back to plastic for the timed HAFFA event. Flight times from the Mass Launch cannot be used for the HAFFA Event.

A. The Heart of America Free Flight Association or HAFFA will provide all of the kits to members at no charge to build these models, the more you make the merrier.

B.  We are asking members to build at least one plane to donate the program so we have a fleet of planes for future events. We hope to have spectators look forward to these Mass Launches each time they attend.

C.  If we have enough planes for each of the spectators that want to fly, members will have a chance to choose a plane to launch in the mass launch typically at 12 noon.

D. Flight times of planes can be recorded during the mass launch, however these times can not be used for “HAFFA Official Flights”.

E. For “HAFFA Official Flights” wooden props as outlined above cannot be used. Any type of plastic prop may be used including one of your own making or an Ikara prop.

6. Members are encouraged to write their names and AMA number on the bottom of the motor stick for future reference so we can tell who built what plane in the future.

Here is the author’s thoughts on the rules regarding this program:

There are two ways to look at the philosophy underlying the rules of our program.

Because of the way that this is set up, you could think of ourselves as being the “Pit Crew” for a particular plane, say for Natalie Wood for instance. Naturally we want her to come out as the ultimate victor, to win the coveted prize of first place or to place high up in the rankings. There is nothing wrong with that. For others however, which for the most part includes most of the visitors and some of the members as well, these individuals look to the “Event Itself” as the real “Winner”. By structuring our rules in the way we have decided to have them, I believe we have catered to both sides of the coin.

So for us competitors out there—Bring it On. For others, just having their favorite star or aviator represented up there in the mix is enough. At any rate all of the spectators watching will be thrilled with the results.
—Jeff Nisley—