This months project is a Balsa Wood Stripper that comes in handy to strip small strips of balsa wood off a larger, wider piece.

One advantage to cutting your own strips of balsa is that you can customize the width of each strip to your hearts content and you don’t have to inventory different sizes, just make them on the fly. Coming from the same piece of balsa also adds consistency to your models integrity. It’s economical too as the retail stores are pretty proud of the small strips of balsa they have to offer when you go to buy them. The savings can be staggering if you put a pencil to it. 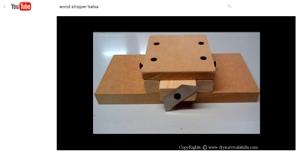 I can’t claim the original idea for this stripper because I originally saw the idea showcased on YouTube several months ago when I first got into the hobby of aeromodeling.

You can watch this same video by going to YouTube. The name of the video is:  How to make a wood stripper by Sanjaya Attanayake.
the link is this:
https://www.youtube.com/watch?v=rk1ZR9g9W2M 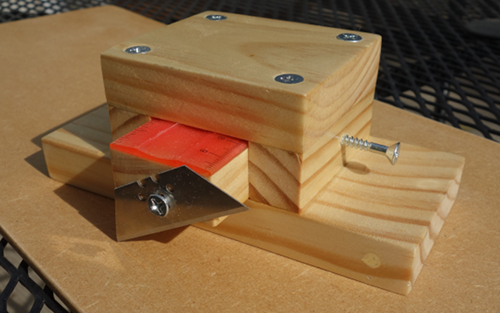 Well I used his idea to make one for myself.

I built it from memory and made it 6 inches long (a bit short, I think) Anyway at left is the result.

One thing I did add was a ruler on the slider piece for a gauge. I cut up a plastic ruler I had lying around. Now that i see it in broad daylight, it really jumps out at you, but it works just fine for more accurately  gauging the thickness of your strip

At a workshop event the club attended (Open Hanger Days at the Old Olathe Air Base) this summer a friend of mine and the president of the HAFFA Club, Mike Basta give the Basla Stripper a run for its money in this next video:    (that doesn’t sound good)

With all due respect for Sanjaya, the first attempt at making the bulsa stripper was OK, but I felt I could improve on the design.

First of all, he has all of the wood pieces screwed together one on top of each other as you assemble the stripper. I felt this was over kill so I simply glued the pieces together with Wood Workers glue or PVA glue, a common glue for wood. Next I streamlined the design by making it 2 inches by 7 inches. Sanjaya’s design seemed a little chunky, so I added som bevels in key places so it smoothed out the sharp corners of the block. The result is, I think,  a better tool as well as felling better in your hand.