Due to the latest info relative to the Corona Virus COVID-19 the annual April Indoor flying contest is now canceled. Believe me!  I am disappointed! Indoor flying is over for 2020!

I just checked the Miami county website and county officials are following the lead of Johnson county to shut down operations to a minimum.  Osawatomie is in Miami county.  The county offices are now closed until further notice.

I will total up the points for the intra-club contest over the last 6 months of flying and publish in another post later this week.

Also note the Beatrice Nebraska Contest has been shut down.  The Beatrice Contest was to be this up and coming weekend March 28th.

Dana Field News Letter Editor put this together for our club as an update.

Thanks Dana I appreciate this! (Jeff Renz HAFFA prez.)

The virus has sure put a wrench into all activities for about everything in life, and for what is being predicted, this may go on for months. As all should know, our monthly meeting for last Tuesday night (St. Patrick’s Day, What were we thinking anyway!) was cancelled. This would have been our last meeting at the Southridge Presbyterian Church as we have sadly been informed the church will be closing after the Easter service early in April. We have a meeting room reserved for the April meeting from 6:00 to 8:00 at the Cedar – Roe library branch in Roeland Park, but with the libraries currently closed for an indefinite time, I am doubtful this can happen either.

Last Tuesday night’s program was to have been given by a member of the Commemorative Air-force “Brian Vonbeveran” about the PT-19 Fairchild they have, and included a slide show on the restoration.

Brian Vonbeveran from the CAF (Commemorative Air-force) has offered to present the program in April at the CAF meeting room in Gardner, which would be really cool because we could look at the actual airplane at the same. Would love to do this, but again, most of us are in the high risk category for the virus and I am hesitant to schedule anything for the foreseeable future. Also to consider, we might be able to have all of our meetings there in the future, a nice venue, but a long ride or drive for all of except Dennis Baker. Will keep everyone informed as things develop.

Outdoor Championship Flying – I have dawdled on officially informing everyone on what the flying classes will be, and practice flying was to begin the second Tuesday in April. Again, I have been waiting for input on what people wanted for events, with no response. So, after talking with a couple of members, and I don’t like to eliminate anything we forced anyone into building in the past, this is it.

1) Combined HLG/CLG – Any AMA CLG or javelin launched HLG glider is eligible. Javelin launched and no discus because the field is too small  for that. So, this includes Mike Basta’s “Sweepettes”. However, for the “Thermic Glider” trophy, only SAM legal only gliders, HLG and CLG, will be counted. This means plans published or kitted before 1950 to be eligible. A separate record will be kept, and you can fly both.

2) FAC Jet Cat – no explanation, this has been our most popular event. Same format as last year – 5 pts for complete paint job, 5 pts for at canard or flying wing, and 1 pt for each wing mounted tank or bomb. Profiles as part of the fuselage do not count.

3) FAC Embryo – Full FAC rules with bonuses for wheel pants, exhausts, etc. Don’t think we need to ROG, or off the table, for our flying, but it would be nice to have someone proficient enough to win this at our own contest for a change. Lots of kits available for this event, Volare has several and a “Prairie Bird” has won many times. I have plans for Don Deloach’s “Embryomatic” is anyone wants that one.

4) Combined AMA Alpha/1/2 Gollywock/1/2 Wakefield – After last year’s learning curve with the “Alpha”, we now have 1 minute plus airplanes. Theoretically, the 1/2 Wake should rule this event, but the 1/2 Gollywock is close, and any one of the three can be flown for points.

Will get an “official” set of rules out to everyone, and thinking about FAC Outdoor Phantom Flash sometime in the near future. That would be something we could win at our own contest as well.

(Thanks again Dana) We can all hang together via email and the “ole tele” feel free to send pix of your modeling projects.  Jeff Nisley and I can post them on our website.

Setting the stage for the March 7th, 2020 Stars and Aviators Mass Launch matchup were four Vanguard P-18 hopefuls. Hedy Lamarr, made and flown by HAFFA Member Roie Black, edged out Pappy Boyington, flown by Wallie Freeburg in the final second of the contest. Pappy’s respectable 2nd place came after winning both the January and February Mass Launches.

Hedy’s pit crew, Roie Black, spent the better part of the morning making final trim adjustments propelling her to success. Roie’s statement after the win was:

“It’s taken me 35 years to get to a point where I have truly won something!”

Hedi made her debut last month bringing the fleet total to nine Vanguard P-18’s that Heart of America Free Flight Association (HAFFA) Members utilize in a friendly Mass Launch contest. Open to spectators participation, the program has been a resoundingly popular feature of our monthly Indoor Flying Sessions since it’s inception last year.  Details about the Stars and Aviator’s Program can be found HERE.

Hedy Lamarr, an Austrian-born actress Hollywood once dubbed “the most beautiful woman in the world”, was quite ahead of her time.

Below you will find links to YouTube videos that will showcase the fact that she was truly a mix of beauty and brains.

In 2015 Google celebrated Hedy’s 101st birthday with a Google Doodle:

If you haven’t seen the movie Bombshell: The Hedy Lamarr Story, you can see it on Netflix. It’s well worth your time. 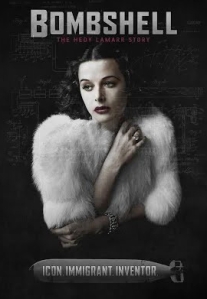